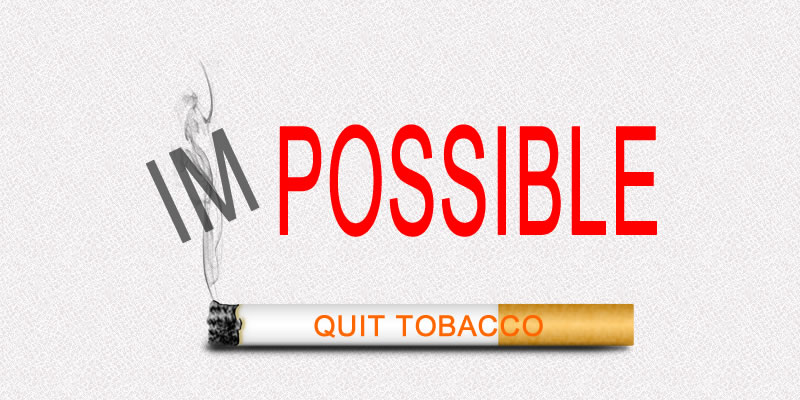 Sahil was almost 15 years of age when he first smoked a cigarette. It was his friend who showed him how to do it. He felt that it was cool. From that day there was no looking back. Now 10 years have passed. He is facing several health issues. His addiction has made him appear older than his age. He has made many attempts at quitting cigarette. But in vain. He is so addicted that he can’t go without a cigarette for even a single day.

Amit ‘s father was a heavy smoker. So, Amit also started having smoke at an early age. His father had cancer. He quit smoking after that. Amit doesn't want to end like his father. So each day he is making an effort to refrain from having a cigarette. But keeps on having a relapse.

Varun a father of two lovely children has been smoking for 10 years. He started smoking to relieve work pressure. First, it was only when he felt any stress. Slowly the addiction increased. He would smoke even after work, even at odd times, on any occasion. Having children was a turning point in his life as well as his smoking habit. He started thinking about the health of his children. As he smoked, they were also in danger of having diseases due to the second-hand smoke effect. He has taken the help of quit smoking sites. But he still is going on and off trying to cope up with the mental and emotional battle.

Studies suggest that a smoker takes an average of 30 attempts before they quit smoking. What happens to a person who says “I want to stop smoking“? He starts with a good motivation. He tries to avoid the cigarette. He intends to end his dependence on nicotine. But he is not sure if he will be able to stick to his goal. His body craves nicotine. Mind tempted him for a single puff. In this situation, a person is bound to give in. He can’t quit smoking cravings for a long time.

A smoker sees the cigarette as his friend whenever in a stressful situation. He feels that it will solve problems as he smokes. But smoking never a solution to any problem. They are afraid to say “I want to stop smoking” as they think the first step towards quitting cigarettes will make him unhappy. It is their gateway from life and its situations. It makes them shut away from the world for some time. He feels that there won’t be an easy way to stop smoking.

Some Problems faced while quitting smoking and solutions

In the beginning, you will have cravings at the times you used to smoke every day. These may be related to the daily habit or your body wanting nicotine. Quit smoking cravings as they will last only for a few minutes. They will fade away as you resist them each time.

Getting cigarettes nowadays is easy. Advertisements for cigarette companies are visible everywhere. Resist the temptation and think about your goal.

Smoker co-workers, friends, family members who are around you all day long may engage in the habit. This may tempt you. Let them know about your quitting attempt. So, they will not smoke when you are around.

Feeling emotional while quitting is common. Assure yourself that you can do without cigarettes.

You will feel restlessness. Try to calm down and do some meditation.

Have trouble concentrating and having a sound sleep. These are the effects of giving up smoking. As the body gets used to not smoking this will go away. Mood swings may be there. You will feel anger, depression and irritability which are normal. Seek some medical help for this. It will vanish with time.

An increase in appetite is seen as one symptom. You will be hungry most of the time. Weight gain also lasts for several weeks. Try to have systematic planning for weight management.

Other symptoms are constipation, dizziness or light-headedness, and mouth ulcers. Consult your health practitioner for this.

What other things you can do?

Once you decide to quit smoking there is no easy way to stop smoking. You have to be determined to stick to your decision.

If you slip and have a cigarette don’t start the habit again. Tell yourself that this thing will happen. You have to start again and make some changes in your plans for quitting. One smoke will not make you a smoker again. Controlling the mind and body is in your hands.

You can use the support given by let's quit an Anti-Tobacco Centre. This centre helps you in the process of giving up the addiction by providing you with proper guidance. They provide a systematic plan for your journey to becoming an ex-smoker that too with natural way Homeopathy. Help will be given for the psychological problems of the person arising after quitting cigarettes.

“Quitters never win, winners never quit." quoted by Vince Lombard, a famous American football coach. People should never be disturbed by obstacles. You should always try and never give up. Every time you want to say I can’t do it understand that there is no easy way to stop smoking. Those who try again and again will always succeed. A winner is that who never gives up until he reaches his goal.